Aragon Tower is a landmark riverside apartment complex on the southbank of the River Thames in London, UK.

This site is brought you by ATRA, the Aragon Tower Residents' Association, with the aim of sharing information and news to help you get the most out of living at Aragon Tower.

Aragon Tower was built in 1962 on the site of the former Royal Navy Victualling Yard. The Tower was one of three 24 storey towers incorporated as part of the ground-breaking Pepys Estate, providing modern housing for 5000 people.

When built, the Tower was bound by the River, a railway branchline from New Cross, Deptford Wharf and old rum warehouses. Gradually the railway disappeared and the docks were infilled. The adjacent Surrey Commercial Docks and the Surrey Canal were closed by 1970 and Pepys existed as the sole residential cluster in the immediate area.

During the late 1980s the London Docklands Development Corporation began a process of regeneration of Surrey Docks and across the wider Rotherhithe Peninsula. South Dock became the largest working marina in London, bordered by an upsurge in new houses and apartment blocks whilst the opening of the Surrey Quays Centre brought a commercial centre to the neighbourhood. New homes were constructed on the old Deptford Wharf and along Grove Street and the Pepys Estate received significant investment during the 1990s.

Aragon Tower was bought by Berkeley Homes in 2003 and by 2006 the Tower had undergone a full rebuild and 5 additional floors of Penthouses had been added on top. The redevelopment of the building won the 2006 Evening Standard New Homes Award for Best Conversion and was Highly Commended for Best New Apartment. The rebuild was also the subject of the BAFTA award-winning 'The Tower' documentary series on the BBC.

Aragon Tower now stands at 29 storeys - one of the tallest residential blocks in the UK with unparalleled views across London. Levels 2-24 contain dual-aspect triplex flats that are branded as 'Z Apartments'. Levels 25-29 contain Penthouse units with private balconies and terraces.

The immediate area is undergoing further regeneration with the expansive Marine Wharf, Greenland Place and Timberyard residential developments offering a wealth of new leisure facilities as well as attracting new people to the neighbourhood. The old Convoys Wharf site, immediately south of the Aragon Tower, is also approved for one of the biggest redevelopment projects in London, promising restaurants, hotels and new homes as as well as a riverside extension of Deptford High Street. 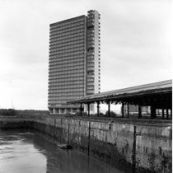 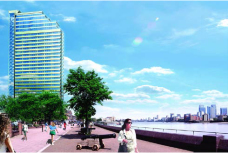